Hallow's End: Prepare yourselves; the bells have tolled!

Trick or treat! Are you in the mood for Hallow's End? "When the decorations of Hallow's End light up Azeroth's cities, you know there's mischief afoot!" This two-week long holiday offers atmosphere, dailies, achievements, a boss fight, fabulous loot and vanity items, and more sugar-sweet candy than you can shake a stick at! It's based heavily on the real-world Halloween, but has some interesting points from Azerothian lore. 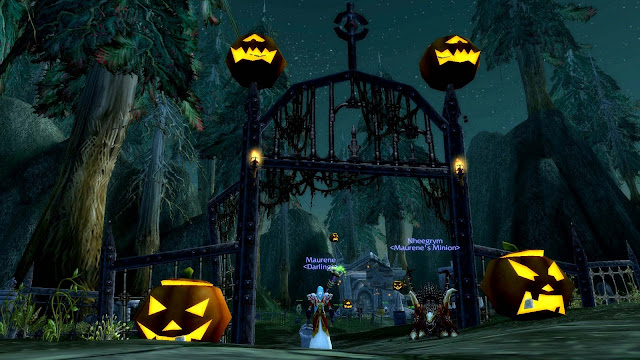 For instance, you may be surprised to know that back in the day, before Arthas had given himself over to killing close friends and binding the dead to his indomitable will, Hallow's End was a harvest festival celebrated by the humans of Lordaeron and Stormwind. (Didn't we just have a Harvest Festival? you may ask.) This goes back to the roots of Halloween as the Gaelic harvest festival Samhain, meaning "summer's end." This autumn holiday marked not only the end of the harvest, but also the ending of the light half of the year and beginning of the dark half. Azerothian humans threw branches onto a burning Wickerman to symbolize their past troubles being burned away in preparation for a brighter future. Similarly, Samhain celebrants walked between bonfires and threw the bones of slaughtered livestock on them as a cleansing ritual. 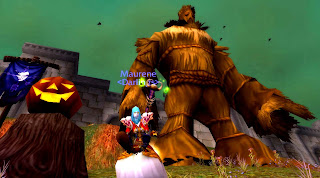 October 31st, Hallow's End, marks the day that the undead were finally able to break away from the grip of Arthas and become the Forsaken. They now burn a Wickerman as a symbol of their freedom, smearing the ash from the effigy on their faces in their fervor. Actual wicker men were used by Celtic druids as effigies of human sacrifice. Caesar and others supposed that living men were bound inside and burned along with the wicker man, but it is debated. Interestingly, the Wickerman in-game presentation is based on Burning Man, an event for radical self-expression in Nevada. Originally a summer solstice bonfire and wooden effigy, the creator claims to have known nothing about The Wicker Man film and in fact changed the festival name to Burning Man to distance himself from it.

Celtic revelers were said to wear costumes or masks in order to either copy or appease the spirits during Samhain. In Ireland and Scotland, children wore (wear!) disguises and went from house to house begging for treats or money in exchange for entertainment in a practice known as guising. This is most closely mimicked in the quest Treats for Spoops! in which the adventurer travels to inns in their major cities and must flex, kiss, cluck, and dance for candy on behalf of a sick orphan. In previous years, players could do more trick or treating at inns to receive a Treat Bag. Rather than the trick-or-treater, the bag would choose to either perform a trick or provide a treat. Treats could be one of the many flimsy masks, a selection of candy, one of the 8 transformation wands, or the coveted Hallowed Helm or Sinister Squashling minipet. Tricks came in the form of costume buffs or 30-second debuff transformations. Now, those tricky RNG items can all be purchased from vendors, and the currency obtained from visiting an inn's candy basket.

Inns also offer the opportunity to go apple bobbing, one of the popular seasonal activities like divination or turnip-carving. Apples feature prominently in the Halloween traditions of Earth, proving themselves a versatile fruit in many romantic rituals. Cutting an apple at night and looking into a mirror, a maiden may see the face of her future spouse. Rather than cut the apple, she could place it under her pillow to dream of him instead. Or, she could cut the peel off in one long strip, throw it over her shoulder, and behold the first letter of his name in its shape! Other romantic divinations were performed with chestnuts and egg whites.

There are plenty of candies to be had this holiday. Tigule's and Foror's Strawberry Ice Cream, Moonbrook Riot Taffy, Styleen's Sour Suckerpop, Bellara's Nutterbar, and Hallow's End Pumpkin Treat can all be bought from a Hallow's End Treats vendor. Players collect local specialties of gumdrops, nougat, mint, and marzipan for an orphan. Each inn's candy bucket will set you up with a handful of G.N.E.R.D.S., Pyroblast Cinnamon Roll, Chewy Fel Taffy, or Soothing Spearmint Candy, along with the new candy currency and other vanity items. 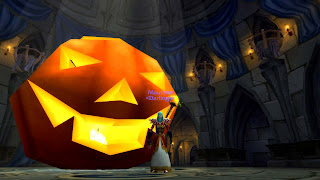 Although the North American-based Hallow's End decorations feature pumpkins, did you know that the original Jack o'Lanterns were carved from turnips and other vegetables? They were placed in windows to ward off evil and illuminated with candles at night. Immigrants to North America began to use the native pumpkins, which were larger and easier to carve. They were first associated with the harvest, and later became representative of Halloween. The earliest references for the name jack o'lantern were night watchmen or will o'the wisps, but the more recent legend stars a man named Jack, who bargains with the Devil. His sins keep him out of Heaven, and either his bargains or tricks on the Devil prevent him from entering Hell. Forced to wander for eternity, he is given an ember from hell (or a vegetable lantern) to light his way.

In addition to grinning jack o'lanterns, you will see clouds of fluttering bats and black cats around town. Killing a black cat will give you Bad Luck as punishment. Black cats have a conflicted history of reverence and revulsion. Although they have been seen as granting good luck in Egypt, Great Britain, Ireland, Scotland, and Japan, rising superstitions in Europe and New England lead to them being associated with witchcraft and misfortune. They are connected with bad luck for gamblers, but good luck for sailors and fishermen. Azeroth appears to consider them good luck, since killing one punishes the killer. "In Egypt, it was once believed that the life-giving rays of the sun were kept in a cat's eyes at night for safekeeping." How sweet!

The adversary of Hallow's End is the Headless Horseman, who spends most of his day setting fire to the small villages of Azeroth. When he's not riding around cackling maniacally in the skies of Brill, he's being summoned and mercilessly slaughtered in the Scarlet Monastery Graveyard by max-level adventurers. In game, he is the former Sir Thomas Thomson, a knight of the Silver Hand turned Scarlet Crusade zealot after witnessing the traumatizing downfall of Lordaeron. He was finally put to death after turning on his own Scarlet Crusade members, then raised by the hidden demon Balnazzar as a Death Knight. His signature loot, contained in the once-daily Loot-Filled Pumpkin, is The Horseman's Horrific Helm, most terrifying because it likely contains his severed head! You might also receive The Horseman's Reins, so you too can be a harbinger of death on a steed from hell. The pumpkin also has a chance at level-appropriate rings, a sword, the Hallowed Helm, a Sinister Squashling, and a temporary Flying Broom!

The headless horseman archetype appears in many different cultures. In Ireland, he is a dullahan, a headless fairie who carries his head under his arm and spurs his black horse onward with a whip made of a human spine. When he stops riding, the person whose name he has called immediately dies. In Germany, one legend has a woman out foraging witness a gray-cloaked man riding a gray horse, and in another, the "wild huntsman" sounds his horn warning hunters not to ride for fear of misfortune. Azeroth's Headless Horseman, however, probably calls up memories of The Legend of Sleepy Hollow for most players. In this 1820 story by Washington Irving, the headless horseman is a nameless Hessian soldier beheaded by a cannonball and buried in an unmarked grave in the town of Sleepy Hollow. Local residents Ichabod Crane and Brom Bones vie for the hand of the lovely lady Katrina Von Tussel, until one night Ichabod is menaced by a headless horseman on his way home from a party. He mysteriously disappears, leaving behind only his hat and a smashed pumpkin as evidence, and it is believed that the Headless Horseman carried him away. However, the ending of the story strongly suggests that it was foul play from Brom.

The complete destruction of Southshore by Forsaken troops makes me curious about how the holiday will change this year. In previous years, the Horde engaged in its own little bout of competition by Stinking Up Southshore and filling its kegs with Rotten Eggs. The Alliance responded with The Power of Pine and by Crashing the Wickerman Festival. Both sets of quests are PVP-centric and recall the bitter battles between Tarren Mill and Southshore.

There are a total of 19 achievements awarding 210 points for this holiday. There are now achievements for Northrend and Cataclysm zone candy buckets! Learn about the quests, rewards, and achievements at Wow Insider and Wowhead!
Posted by redcow at 10:48:00 PM