This week's Blog Azeroth shared topic is from Effraeti of Effraeti's RP, who, inspired by Valentine's Day, wants to know:


Who is your main character's love interest? Are they involved with someone, do they pine for someone?

Many bloggers lately have been discussing playing with IRL couples who raid together. How would this transfer to the characters they play? Why would their characters slay dragons together?

What an interesting topic! To be honest, although I don't RP in game with my characters, since I like to write about them, or at least make up little stories about them as I quest, I sometimes think as far about their character to figure out their sexuality. Other times, it sneaks up on me with a random character, like my night elf priest, who one day up and fell head over heels with the flight master in Lakeshire. (I think it's her snappy flight master goggles; never mind that many other ally flight masters have the same getup.)

This also ties in nicely with another topic I've been wanting to rant about explore but haven't had cause to, and that is the idea of who should and shouldn't be paired up. Typically this is from a fan's perspective on a book or show, but since I often think like a fan it influences my writing decisions as well. After reading or watching story after story in which two characters experience a lot of difficult things together, but only start a romantic relationship if they are opposite genders, I've gotten fed up! Why do the male and female main characters have to fall in love with each other, but the two male leads just become Super Bros? What an irritatingly predictable trope! So, for a lot of reasons (I'm a contrary person, I want more diversity in my media, I like friendship stories, hot boys kissing is hot) I've gotten to the point where I intentionally want to pair same-sex characters, but make opposite-sex characters Best Buds With Absolutely No Sexual Tension, Seriously Not Even A Little.

Of course, as a fan, this can annoy the author. "My characters aren't gay, ffs! They are just great friends!" Alternatively, "These characters are soulmates! No one and nothing could ever come between them!" Meanwhile, I cackle maniacally and drown myself in fanfic that disagrees. From that perspective, I'm completely okay with the idea of someone reading some other sexuality or pairing in my writing. Take the leatherworkers, for example. Since they are a male tauren and a female orc, my first inclination was that they should be bffs and nothing more. After all, I have some extremely satisfying friendships in my life, and I think they represent a deep and abiding form of love. However! I understand that in many cases (and sometimes mine, when I read a story), the friendship isn't satisfying enough, which is why we invent a sexual or romantic relationship between the characters.

Okay, that concludes my rant. By now you are like "oh my god did I seriously just wade through two whole paragraphs of frothing fangirl drivel?" You did! But now I will tell you about my other characters, promise! 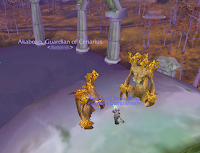 Akabeko, my oldest character, has given me some interesting romantic ideas that I basically abandoned in her story. It just wasn't interesting! My first guild's GL was a tauren male called Akatosh, and we used to joke that our characters would have two children named Bekotosh and Toshabeko. Humorous, sure, and even led me to think about the complications of having a baby but continuing to adventure (raised by a grandmother? abandoned as an orphan?). Then I realized that I couldn't be bothered with that much drama, and briefly considered tying her to my previous manfriend's tauren druid. Even that wasn't interesting enough! I mean, Akabeko kills dragons on a regular basis, is exalted with nearly every faction she has ever come in contact with, and has strong ties to her guildies. She doesn't exactly need a romantic relationship to have an exciting life!

Next up is Sprinkie, the goblin who miraculously escaped the destruction of Kezan. At first I thought she might be asexual, since so much of her time is dedicated to making gold and killing stuff. Then she ran into Baron Revilgaz, and that cutie in Fuselight by the Sea... and I realized that she's just a horndog with no time for relationships. Like James Bond!

The last character of any note is probably my pally Iharu. I assume that blood elves are pretty openly sexual people, which would include her. I randomly paired her with previous manfriend's female pally, which is the closest I've ever gotten to making game behavior reflect my real life relationship, but since we aren't together anymore I don't know what I'll decide for Iharu.

As you can see, romantic relationships don't play too big of a part in my characters' stories. Although I'm a huge fan of reading romance (and experiencing it, I guess), I don't much care to write about it when it comes to characters I've created. I wonder why that is? Maybe if the world were more restricted, or I had an RP partner, or played two accounts, I would be more inclined to play matchmaker with my toons. What about you? What romantic entanglements do your characters have?
Posted by redcow at 6:00:00 PM