My review of questing in Uldum Note: contains spoilers for the zone. 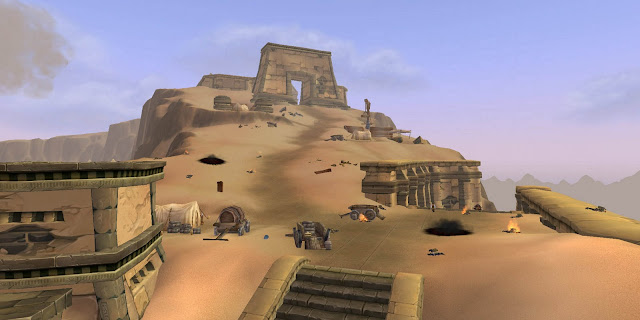 The name of this zone might as well be Harrison Jones and the Elaborate Movie Reference. Most of the quests in this zone are a massive extended reference to Raiders of the Lost Ark. Not that I mind, because it`s a great zone and an interesting series of quests, and Harrison Ford is a major hottie Indiana Jones is cool. The Tol`vir are similarly a very neat race - is it creepy that I kind of want one as a mount??

Gnomebliteration KATAMARI GNOMACY. When you get to this quest, promise me you will tab out and put on this song to listen to while you do the quest. Promise me.

There are a shitload in this zone, mostly to drive home the strong Indiana Jones reference and cinematic effects - it`s like you`re in a movie! I know that the excessive cutscenes annoy a lot of people, and there were some moments where I was already preemptively trying to move my character and was frustrated when I got sucked up into another cutscene instead. Still, for whatever reason, I appreciated this touch in making the whole zone more reminiscent of a movie. Although I know there are a lot of complaints about the fact that it so heavily relies on a movie to create its story. (For those playing at home, see if you can guess which of my screenshots were taken during cutscenes!)

I`m a manataur! (Sadly, I had to have this particular pun explained to me. I was asking manfriend if there were manataurs in game, or if it was supposed to be a strange reference to a minotaur, and he pointed out that it`s the man- version of a centaur. Sigh, me)

Also, Hacking the Wibson made me laugh when I realized what I was supposed to do.

Being Harrison`s buddy! Whatever, I`m a fangirl, but being his assistant was great in part because he treats the player character with such affection - even saving you when it seems all hope is lost!

I don`t know if sad is the right word, but at the end of the Schnottz chain you help all the Generic Celebrities escape what turns out to be their prison (this is actually where I dinged). Because of the Nazi overtones, I remember feeling scared on their behalf - escape before Schnottz discovers you! He`s pure evil! The whole questline was really rather awkward - although I figured that we were ostensibly infiltrating the bad guy in order to take down the operation from the inside, the fact that quests didn`t really emphasize that, and particularly the presence of the Horde archaeology trainer Belloc made me feel like I was actually foolishly going along with the plan without realizing who and what I was working for. I guess where I am willing to see a forsaken poison-innocents quest and say "Neither I nor my character would do that, but I need it for Loremaster", I am less eager to say "I am opposed to me or my unwitting character aiding an allusion to monstrous people who existed in my reality."

No female Tol`vir? Would it really be so hard to shrink their biceps, strap some watermelons to their chest, and bring it all together with a tastefully tattered leather bikini?