Imagine my surprise when I realized that a year had gone by and it was Children's Week once again. I felt kind of bad, realizing that I hadn't visited Logal at all, but that's the point of the holiday, right? Prior to that, I had been mucking around the Swamp of Sorrows; there's a goblin getaway and a few Horde outposts, so there was plenty to do. Most of it involved explosions, so I was right in my element. 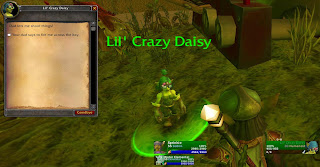 If it hadn't been for Myda contacting me, I may never have gotten the postcard from the orphanage asking me to drop by again. Fortunately, she's been holding down the finances like a trade prince and was at home to get the message. I ported back to Orgrimmar right away.

Logal, in the nature of all children, grew up. Literally - he's enormous! I mean, he was already taller than me when we first met, but now he's quite the picture of young orchood. Of course, he wasn't too old to give Auntie  Sprinkie a (bone-crushing) hug. Ahh, to be young and awkward again! 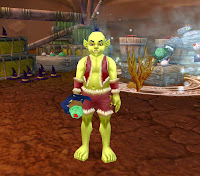 We took a walk through the Drag to catch up on the past year. He looked healthy enough, but I was glad to hear that not only is he still getting regular meals and general education at the orphanage, but he's also been visiting local businesses to learn about the various trades available to him. It seems that throughout the year his heart's desire has been everything from rocket engineer to leatherworker to warrior. I told him about my adventuring, not that there's anything particularly interesting to tell, but he seemed to enjoy it all the same. In a year or two he'll be able to leave the orphanage and apprentice somewhere; he said even now he sometimes gets odd jobs for a little spending money. If he had any interest in banking I'd make him a Sparklefizz, but I suspect he needs something a bit more physical than that.

We were deciding on something for lunch when I received an urgent summon from Stonard. One of the commanders I had worked under was requesting my attention in the Blasted Lands on everything from marauding ogres to a mine dispute to a misplaced forest. 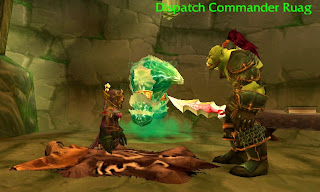 I had to go, Journal. If I want to maintain any credibility with the Horde I need to obey my superiors, even if it means letting a kid down. So I told Logal to go back to the orphanage, and I would be by later in the week to take him around. Then I opened a portal to Stonard. Right as I'm about to close the portal, suddenly Logal comes barreling through, just barely missing being snipped right in half by arcane energy!

To say I was angry would be an understatement. I had a job to do, and such jobs are rarely safe even for those trained to handle them. I didn't want to put Logal in danger; if he wanted to look for danger he could wait until he was the right age and do it after lots of proper training. I explained this all to him, trying not to blow a gasket, and when I was done with my tirade he simply looked at me and said please, I want to do this. You're supposed to go on your first hunt with your parents.

I let him come with me. Don't give me that look! How can you say no to a request like that?

The commander had a list of tasks for me to take care of, so I went with the least-dangerous sounding one first. A mine dispute - surely that's just some smooth negotiating, right? In this case, it appeared that negotiations and failed and the backup plan was to kill everyone and salt the earth. Or the ore, in this case. We followed the cart rails deep into the mines and found a troll overlooking a camp of terrified Alliance miners. They had discovered something deep in the mines that scared them so much they suspended operations. I was worried about Logal seeing whatever it was, but it's not like there was anyplace to leave him wait.

We snuck past the Alliance with a makeshift disguise made out of a supply crate. Perhaps not my best invention, but they were so rattled they didn't notice it changing positions. Logal didn't quite grasp the danger of sneaking through a swarm of hostiles, but at least he was quiet and obeyed my instructions.

The terror turned out to be a disgusting tentacle demon. Logal couldn't stop staring. I ordered him to hide under the box until I had taken care of it, but when it got a good swipe on me, he threw off the box and started shouting at it. Of course, this attracted its attention, and I managed to kill it just in time. Yes, I know. It was irresponsible and reckless of me to bring him. He was more subdued on the trip back to the entrance of the mines, but once we were on the surface his good humor came back. Maybe I'm just trying to justify it to myself, but I think if he wants to learn about the realities of combat he might as well do it alongside someone with experience who cares about him.

Still, I didn't report to any of the quests that would likely have me killing humanoids. It's a bit harder to stomach killing someone who looks like you than it is to kill an animal or a demon. If the current atmosphere is any indication, Logal will have plenty of opportunity to kill humanoids in the coming years. I don't need to hasten that experience. 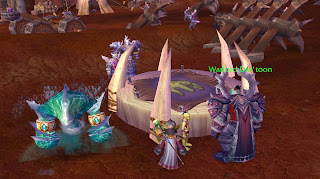 So next we went to the Dark Portal. I only vaguely remembered things from my history lessons, but Logal was completely bowled over. After all, it is how his people got into Azeroth in the first place. His parents came through that portal. I let him gape while I picked up orders from the warlord and then it was off to kill some more demons. I wouldn't let Logal help actually attack them, but I told him to keep a good lookout for other enemies so he would have something to do. It was a lucky thing, too, because there were demons everywhere around the portal!

Logal wanted to go through the portal, but I had to put my foot down at that. The other side is still supposedly a constant warzone, and frankly even I'm not prepared for that. Besides, he was looking a little shook up after all those fights. Ugh. The more I think about it the more I regret it. But what's done is done. He would have started seeing that kind of violence sooner or later.

Finally I brought us back to Orgrimmar, and to make up for working during his special week, I called in a few favors and got a guest pass to Gallywix's rooftop pleasure palace from Boss Mida. I let Logal swim around in Gallywix's pool and drank overpriced cocktails all weekend.
Posted by redcow at 6:32:00 PM