Quilin: Guardians of ~my heart~

The Mogu's guardian beasts are known as Quilin (or quilen?) in Mists of Pandaria. The name is taken from the mythical creature known as the qilin (kirin in Japanese). Qilin are chimerical, mixing horns with dragon heads or scales or horse hooves or deer bodies or ox tails. Its appearance is a good omen, and although it may look fearsome, it is a peaceful creature. It doesn't even eat meat! Qilin only punish the wicked, and may bring out their fire-breathing side if a pure-hearted person is threatened. In China, it is the third-most powerful mythological creature. As such, the Qilin dance is ranked third most important, after the Dragon and Phoenix dances. In Japan, the kirin is considered the most powerful mythological creature. (fun fact: kirin is also the Japanese word for giraffe.)

Check out some pictures of these fantastic creatures: 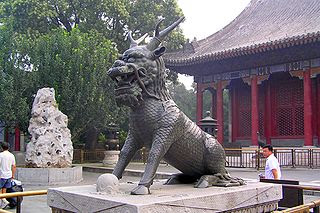 Now you may be realizing that although WoW's quilin shares a name, its model doesn't really look like a mixup between dragon, deer, and lion. It looks more like the Chinese guardian lions (shishi, "stone lion"). Sometimes called Foo Dogs, these lions are always created in pairs. The male rests his paw on the sphere of the world, and the female has a playful cub on her back (isn't that always the way??). 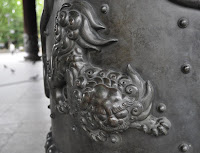 The shishi were brought to Japan via Korea and are known as komainu. There are a few types, most notably - and my personal favorite - are the a-un komainu. These paired statues are nearly identical, except that one has its mouth open, pronouncing the beginning of the Sanskrit alphabet "a," and the other has its mouth closed, pronouncing the final letter "um." In Japanese this pair becomes a-un.

In Okinawa these pairs are called shisa, which is, according to wikipedia, a shortening of shishi-san. Shinto shrines may feature other paired guardian creatures like foxes, boars, and tigers.

Why did I tell you all that? Not to teach you, oh no. You see, I really love these lions. I am definitely getting the Mists ~Deluxe~ version if it means I get to have a momma mount and a baby pet. Whenever I see a-un lions out and about, I try to take a picture of each one. And now you have to look at them all!