Vacation vacation! Mainline all the games!

But first....I got locked out of the server. Again. I reopened my ticket from a few weeks ago to let them know that the system check done on Blizz's end was giving me Battle Net Error #105 (it flashes so quickly that it took a LOT of failed logins to read the number). This time around, I was directed to an already-locked forum post in which the only recommended fix was player-suggested and came with a blue caution: "We do not actually endorse this method."

Anyway, that fix didn't work. Later, I got another CS response informing me that my issue was resolved because something related to ATT service, which I don't have. I still couldn't log in, and reopened my ticket, and this time they told me that since I'm in Japan they don't actually care about any issues I may have. I'm trying real hard to be nice to you, CS employees of the world, but....!!

I eventually found a workaround from another thread, and since then I've been playing, playing, playing! I cranked up the music, because it's been a while since I listened to the actual in game sounds rather than a podcast or TV show. The Pandaren inn music is really the greatest. I even did some dailies on Aka, which hasn't happened in weeks! Much twitter rejoicing was had.

I finally got Weipon to level 85 and rushed to Jade Forest, all ready to have my HEART BROKEN INTO PIECES. Since I first did the questline leading up the Temple of the Jade Serpent, I've been really impressed by the impact of the final scenes. Well, you read the story, you probably know exactly how much. Finally getting to do it on the character I had intended to experience it was really intense! Even better, now that I'm questing and taking notes on all the fun scenes that can play out, I'm starting to think about the future of the story! 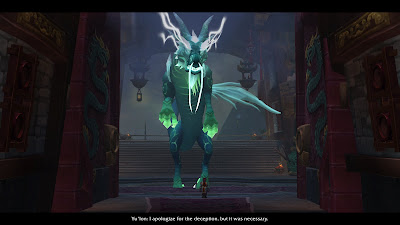 Thank you very much to those of you who replied to the podcast post! Due to crappy RL schedules, we won't be recording until this coming Saturday,  but since I don't intend to do anything very fancy with the audio, it should be uploaded quickly. If you have any more burning thoughts, be sure to get them to my inbox before then!