Love is in the Air: Some just call it friendship

Going out for Valentine's Day? Or will you be staying in for Singles' Awareness Day? The good news is that WoW's take on the western day of love is filled with a sinister undertone to make even the most cynical of us enjoy it! Love is in the Air runs from February 5th to the 20th and features quests, a daily boss, and a host of saccharine pink festivities! 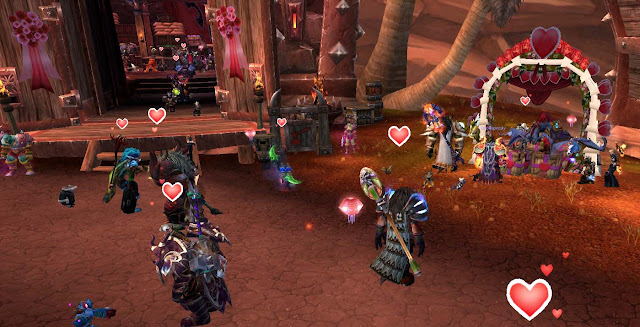 Lots of websites detailing the history of Valentine's Day cite three possible origins for the holiday. One is that the Roman emperor outlawed marriage among young men in order to produce better soldiers, and St. Valentine continued to perform marriages in secret. Another is that he was imprisoned and fell in love with his jailor's daughter, sending her a final note signed "From Your Valentine." The final origin states that Valentine helped Christians escape harsh treatment in Roman prisons. Wikipedia rejects all of these as legends, stating that St. Valentine was merely one of two priests martyred and honored on the same day, February 14. Add on that the suggestion that the holiday was created to appropriate the spring festival of Lupercalia, and you've got plenty of options!

Regardless of the origin, folks in Great Britain decided it would be a great idea to exchange tokens or gifts with friends and lovers in the mid 18th century. Players can do just that in game once daily for each of their faction leaders. Of course, these are gruesome Lovely Charm Bracelets made out of Lovely Charms collected from level-appropriate monsters, so it still retains that good old Warcraft feel. Keep in mind that  if you are on the Darkmoon 250 Grisly Tokens collection quests, you will not loot the charms until you have finished looting the tokens. [At level 85, head to Icecrown and farm the packs of Converted Heroes!]

In the 1840s, factory-made cards helped to reinvent the holiday, making card-exchanging easier and more prevalent. The US upped the ante with all kinds of gift-giving on the holiday in the 1950s, and in the 1980s the diamond industry began to encourage gifts of jewelry. Fun facts: In the US, 190 million cards are sent each year. If you include the classroom exchanges done in elementary schools, the number increases to 1 billion, and teachers become the main recipient of Valentine's cards. Sweet deal! If you want to see some really great Valentine's Day cards, I highly recommend checking out the vintage valentines section of the wikipedia article. 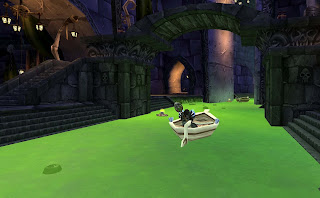 Other countries that play WoW have their own approaches to Valentine's Day. Although it is acknowledged in China, the main romantic holiday takes place during the Qixi Festival. I described the romantic legend behind that holiday in this post. Korea and Taiwan have two romantic holidays: Valentine's Day on February 14th, followed by White Day on March 14th. In Korea, women give chocolate to the men in their life on Valentine's Day, and receive non-chocolate sweets from those men on White Day. It is reversed in Taiwan. Humorously, Korea also has Black Day on April 14th, for those sad souls who gave and received nothing on the two preceding holidays. They celebrate (mourn?) their lack of love life with dark clothing and a meal of black noodles.

WoW's approach to this holiday is...very different. Although Azeroth's citizens find themselves in a haze of affection for their friends and lovers, players soon find out that it is maliciously created! The Crown Chemical Company is working on a chemical plague weapon to infect all of Azeroth, and is testing it in the form of perfume on citydwellers! The player is sent on a series of quests to gather information, track down Snivel Rustrocket, and finally strike at the heart of the Company, Apothecary Hummel and his two lackeys in Shadowfang Keep. Players can also kill level-appropriate Crown associates and destroy their chemical weapons daily. Oddly enough, the Crown Chemical Co. offers its own daily: giving free samples of their perfume, cologne, or chocolates. Sure, I'll pass out your free chocolate samples! Good luck with that chemical weapon to infect all life on Azeroth!

I don't begrudge you doing all your dailies, though. You need to collect your Love Tokens so you can buy sweet stuff! From the Crown Chemical Company! They've got a host of buff perfumes and colognes (don't worry, you can buy either!), heart candies, rose petals (nothing is more romantic than being showered in dismembered plant matter), a lovely rose, Love Rockets, Silver Shafted Arrows to play Cupid with your fellow Azerothians, a Romantic Picnic Basket, a Box of Chocolates (obligatory Forrest Gump reference), the Love Fool, fancy suits and dresses, and your very own Peddlefeet! 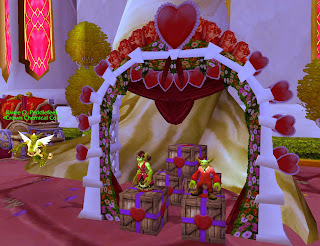 The companion pet Peddlefeet, while intensely creepy, is a reference to the chubby son of Venus, Cupid. His magical arrows make all those struck by them fall in love. Oddly enough, when you shoot your own Silver-Shafted Arrows, you just make Peddlefeet follow around another player. That's not very romantic at all.

The Love Fool is similarly unsettling. It looks like a target dummy, and you will need to buy a few of these to take around the world and /pity. Go ahead and listen to The Cardigans' Love Fool while I tell you about the 1984 play Fools for Love. It's about the relationship drama between two high school sweethearts Eddie and May. Throughout their affair a character known as the Old Man periodically comments. In the end, you find out that he is their father and bounced back and forth between their mothers. So. Yeah.

Ok let's talk about the other sweet loot! The daily boss has a chance to drop a Toxic Wasteling, which is more exciting than the Disgusting Oozeling in that it eats critters! Plus, you have a very, very, very low chance of getting the Big Love Rocket, which increases your chances of getting laid by one thousand percent! Haha, just kidding. It hasn't worked for my guildie, at any rate. New in 2012 is the Swift Lovebird, purchasable for 270 Love Tokens from the Lovely Merchant. 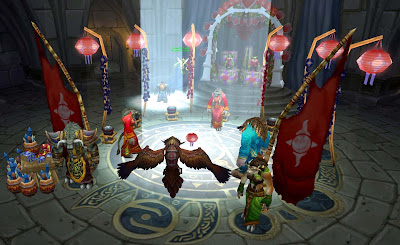 Does anyone truly like Sweethearts Conversation Hearts, or do you just buy them for the quips? The idea came from an older snack known as "cockles" which were crumbly little candies that had a paper motto inside. Sort of like sugar fortune cookies! When a method was discovered to transfer dye from cloth to candy, the paper was abandoned in favor of printing the motto directly on the sugar. The present day conversation heart was invented in 1902.

Last, but not least, I want to mention a tangentially related item known as a "vinegar valentine." Like it sounds, it's a valentine card that comes with an unflattering caricature and insulting poem rather than sweet nothings. I love snark, so this is right up my alley. If you're looking for something mushier, check out the original form of the "Roses are red" poem from Gammer Gurton's Garland!

This holiday has 16 achievements (and one bonus Feat of Strength for the love rocket) for a total of 160 points. The meta achievement awards the title The Love Fool and counts towards What a Long, Strange Trip It's Been. You can check out guides to the holiday quests and achievements on Wow Insider and Wowhead here!
Posted by redcow at 6:00:00 PM