#ffw Serenaded by the lovely Karegina! 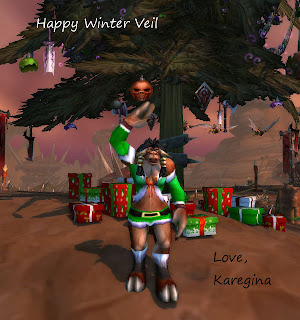 It was dark as Karegina winged her way through the Vale of the Eternal Blossoms towards the Shrine of the Two Moons. A lot had been on her mind these last few days and she knew that Winter Veil was upon them. She'd had big plans for one of her friends, Akabeko, but those plans ended up falling through because she lost her voice.

She shifted into cow form as she flew through the Shrine of the Two Moons' archway and she headed straight towards portals in the Imperial Mercantile. Popping through the portal into Orgrimmar, a song snuck into her head, something she'd heard as someone flew in from Arathi Basin one day.

“Rockin' around, the resto tree, it's a BG holidayyy, If he can keep lifebloom on me, I can kill allies all day!”
She remembered that her original plan was to find her friend Akabeko and sing all her overheard Winter Veil carols to her in person. But that didn't work since she lost her voice. She remembered the original singer was a very angry orc but she had thought the songs would sound good with her husky tauren voice.

She willed herself into bird form and flapped her wings, lifting herself off the ground and heading towards the tree that Great Father Winter had erected near the flight master and riding trainer. As the giant tree came into view, she remembered all the good Winter's Veils she'd had under that tree, or a similar one.

Last year, she remembered running into her sister Annanda shortly after Annanda had her mind transferred from an undead until a goblin. She remembered the year before when her love, Paliclaus, gifted her with a elixir of the sands so she could turn into a giant dragon. (Every druid really wants to be a dragon ya know.) And the years prior, she remembered laughing with her best shaman friend, who started as a tauren, then had her mind transferred to a troll, then to a goblin.

Winter Veil has always been Karegina's favorite holiday. Durotar never got cold, but it got cooler during this time of the year and felt a little more the Mulgore. Which brought to mind another song she'd heard from an angry orc.

She'd heard it as he was returning from a Eye of the Storm battleground. She always heard the funniest things as people returned from battlegrounds. 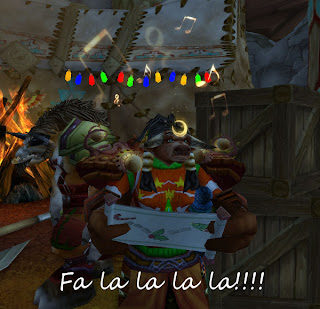 Karegina flew around the tree a few times before spotting Akabeko standing before Tatepi, the banker. She landed, pulled on her gaudy singing sweater and started singing the rest of the overheard carols.

She took a deep breath for a trickier carol and started in again.

With that, she shifted into bird form and flapped away.

*********
Your real present was going to be me singing these carols plus a few more but our recording equipment broke and then I got sick so my voice is weak. Thanks to @angryorc1 for the lyrics and to @redcowrise for organizing this wonderful event. I loved doing it last year, and I loved doing it this year. Merry Winter Veil!! (Karegina | Ysera's Daughter)
Posted by redcow at 5:30:00 AM