Feast of Winter Veil: No, you can't sit on my lap

Celebrate the final month of the year surrounded by red and green festivities! The Feast of Winter Veil runs from December 16 to January 2 and provides players with some relaxed opportunities for quests, achievements, and presents. May your feast of Great-Winter be one merry and bright! 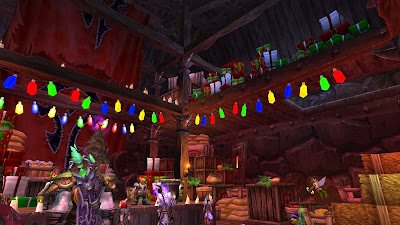 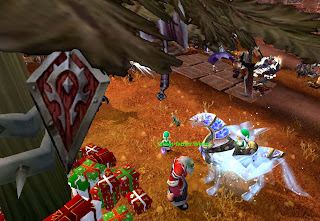 Nowadays, Greatfather Winter is represented in Azeroth by a dwarf or an orc, depending on what alliances you hold. He works for Smokywood Pastures, a goblin organization comprised of the Jinglepocket and Copperpinch families. Year-round they can be found selling food and drink to those entering battlegrounds, but during Winter Veil they come to Orgrimmar and Ironforge to sell holiday-specific items, recipes, and treats. Greatfather Winter works hard, and he will ask you for some milk and cookies to tide him over till the end of his shift. Have you ever left out milk and cookies overnight for Santa? (One of my elementary students lamented that he had, but his father ate them all before Santa could get to them!)

The items sold by Smokywood Pastures are staples of the holiday season. Greatfather's Winter Ale (well, he was worshipped by the dwarves!), Candy Cane, Snowballs, and recipes for Gingerbread Cookies and Egg Nog, which will use the Holiday Spices and Holiday Spirits, are all seasonal items. Cooks will receive a recipe for Hot Apple Cider in the mail. If you're looking for an interesting read about the history of holiday food, give this a spin! Long story short, cookies have a long association with holidays, candy canes (and other hard sugar candies) were often taken as medicine for colds and coughs, and egg nog developed out of an old hot drink recipe involving milk, spirits, and spices. Fruitcakes were originally a difficult and involved British specialty, and mincemeat pies did at one point routinely contain meat, along with fruit, sugar, and spices. You'll receive Graccu's Homemade Meat Pie and Graccu's Mince Meat Fruitcake during your quests for Winter Veil! Who Graccu is, however, remains shrouded in mystery. 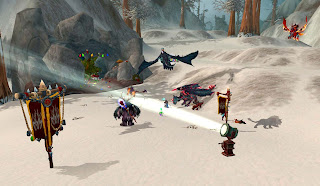 The simple quest chains for the holiday consist of saving Metzen the Reindeer and recovering a stolen shipment of treats from The Abominable Greench. Metzen the Reindeer is a clear reference to Rudolph the Reindeer, both of whom help to guide a sleigh during their respective winter holidays. Although his in-game model does not have a shiny red nose, he appears in Christie Golden's short story "I Got What Yule Need." (note to self: add to kindle list.) Fun facts: Rudolph was created long after Santa's original eight reindeer as a holiday poem to accompany a department store promotional coloring book. It was then adapted into a children's story and a carol.

Both the name Greench and the title of the quest You're a Mean One reference the Dr. Seuss story How the Grinch Stole Christmas. The Greench's model is a yeti, also known as the Abominable Snowman, and plays a role in another children's Christmas movie, Rudolph, the Red-Nosed Reindeer. While you're out in Alterac, be sure to pick up some Holiday Snow or Hardpacked Snow to have a snowball fight with friends! This year, the Greench quest appears to have been made a daily and rewards a random gift. 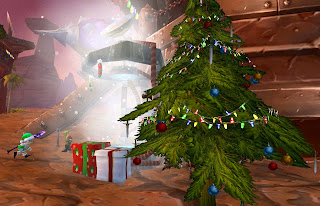 Crafters receive all sorts of fun recipes during this holiday. Alliance tailors can whip up Red Winter Clothes, Horde tailors learn it in Green, and leatherworkers can make a matching pair of Winter Boots. You can find Red and Green Winter Hats on certain bosses during this season to complete the set! After saving Metzen, there's a chance to get a Green Holiday Shirt pattern in the reward! Wearing your holiday clothes and enjoying a festive fruitcake will grant an achievement, but it doesn't stop there! You can hop in a Winter Wondervolt Machine to be completely transformed into one of Greatfather Winter's helpers, and then wreak holiday havoc on battlegrounds to get your 50 festive honor kills. If you're still in the mood to play dressup after all that holiday slaughterin' Smokywood Pastures will reward you with a Winter Veil Disguise Kit to transform yourself into a stationary snowman. You'll need this in Dalaran for an achievement, not to mention it matches one of the four possible holiday companion pets found in the gifts under the tree.

From December 25 to January 2, gift-quests will appear under the holiday trees in Orgrimmar and Ironforge. Bringing fir trees inside and decorating them during Christmastime began in Germany and was subsequently made popular by Queen Victoria. Tinsel used to be made out of thin strips of actual silver! Presents were originally hung on the tree or placed near the hearth, and as their weight and size increased, they worked their way to the bottom. Orcs have somewhat changed the aesthetic with their skulls and swords, but the spirit remains the same.

WoW players should begin with a Gently Shaken Gift and Carefully Wrapped Present, as they have no level requirements. The Winter Veil Gift and Festive Gift require level 10, the Gaily Wrapped Present level 20, and the Ticking Present level 40. The first two will reward Winter Veil Roast / Egg Nog and Cookies, the Winter Veil Gift contains the year's special limited item, and the Festive Gift contains a Wand of Holiday Cheer, which forces those affected by it to have a good time. Bah, humbug! The Gaily Wrapped Present is my favorite, of course, as it rewards one of four companion pets: Green Helper Box, Red Helper Box, Snowman Kit, and Jingling Bell. The final gift rewards you with a fighting Mechanical Greench, a handful of Preserved Holly to keep your mounts festive year-round, and the chance of another pattern.

Opening and playing with your Winter Veil presents leads to more achievements. The Red Rider Air Rifle puts you right in A Christmas Story, and you don't even have to worry about a bunny suit or having your holiday feast eaten by dogs. Just don't shoot your eye out! This year's gift is rumored to be a Gaudy Winter Veil Sweater, which you can don and go a-wassailing in the opposing faction's cities. "Carol" originally referred to a song sang during a circle dance, and evolved to become associated with Christmas songs in particular. The cheerful songs describing the holiday didn't catch on in somber churches for a while, and were instead sang in public. It's also theorized that the poor would literally sing for their supper, and that going door to door to ask for wassail and other sustenance was a blend of pagan traditions and the Christian carols. Carols were actually banned from 1647 - 1660 by Oliver Cromwell, who thought Christmas was pretty Serious Business. Many of the carols we know today were written in the 1800s.

Should you find yourself under mistletoe, be sure to give the Winter Revelers a /kiss. They'll make it worth your while with a handful of snowflakes, holly, or more mistletoe. Mistletoe is an evergreen parasitic plant originally believed to have miraculous powers to cure illness and protect against evil. It is also considered and aphrodisiac and associated with truces and peacemaking. Originally, when caught in a kiss underneath, one would remove a berry from the plant. When all the berries had been removed, you couldn't use it as an excuse to steal a smooch anymore! The name, unfortunately, comes from "missel," meaning dung, and "tan," meaning twig, as the plant was often seen growing on branches with bird droppings on them! Romance!

If that hasn't got you in the mood, maybe cooking up all the holiday foods will! You can get tips on that and other holiday quests and achievements from WoW Insider and Wowhead's guides. This holiday has a total of 14 achievements for 140 points, rewards the title Merrymaker, and counts towards What a Long, Strange Trip.
Posted by redcow at 6:00:00 PM