I skipped out on the summons to Stonetalon Mountains and returned to Orgrimmar to get ready for my trip to Booty Bay. There were auctions to manage, training to catch up on, and networking to be done. Aside from collecting my auction earnings, I generally avoided the non-goblin areas of Orgrimmar. Then again, it's filthy and smelly and even though it makes my heart clench with longing for home... I don't want to be there. We've set up little more than shacks and patchy tents - that's fine for roughing it in the country! - but we are better than that. I want us to get our collective act together and make something more of what remains of the Bilgewater Cartel!

While I was in the city I got another surprising piece of news - a candidate interested in apprenticeship! I had gotten a fairly decent stream of applications after posting my advertisement, but most failed in the early stages. Then, since revealing myself as an environmentalist, the apps have all but dried up. Until now! She's young, surprisingly so, but she survived the exodus from Kezan and the Isles and has been befriending animals in the Barrens or something. I know, kind of weird (and here I can barely get on with my water elemental), but she has a good head for figures that can only improve with age. That, and I'm low on options. Unfortunately, I didn't have time to meet her before I left for Ratchet, so I'll have to make my initial assessments based on her written responses.

The trip to Ratchet was uneventful. I managed to catch a caravan from the city gates to the Southfury River that borders the Barrens. We passed through much of the surrounding marshland and I was glad I hadn't tried to take my trike through that. The orcs told me that it had all been desert, but the Cataclysm caused the river to flood. All that standing water baking in the sun stinks! 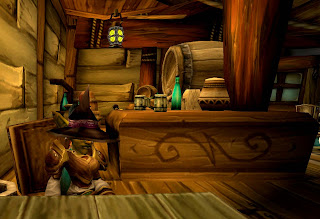 At the river crossing, I had the option of driving my trike through the Barrens, following the road to the Crossroads and then to Ratchet, or shelling out for passage on a tugboat downstream. The prices were outrageous, but my good mood meant I only haggled a little. Soon, we were chugging along at a good clip, watching the banks rush by and wildlife wander aimlessly about. When the sun set, the passengers went belowdecks and awoke to sounds from the docks. I like the water just fine, but mostly from a looking perspective and not from a pitching, rolling boat perspective, so I decided to spend the day in Ratchet and set sail for Booty Bay in the evening, when all the sailing would be done overnight.

Ratchet is one of the cities run by the Steamwheedle Cartel, so I was eager to see how they do business. Although most of the main tasks - auctioneering, banking, vendoring - were managed by goblins, there were a handful of other races managing their affairs. Although they are a neutral faction, many goblins were half-wary of my affiliation with what has traditionally been their major competition. I stopped asking questions about their trade and tried to just soak in the atmosphere. 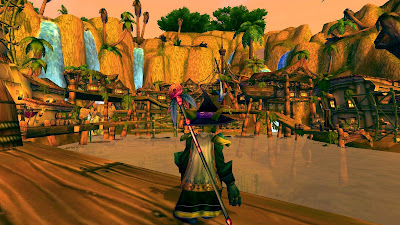 Then there was another boat ride, which my stomach is begging me not to remember. But, soon after that! I was stepping off the boat onto the docks at the famed port city of Booty Bay. It was...glorious. How can I even describe it, Journal? I must have stood there gaping for years while the dock exploded with workers hauling cargo to and from the ships. The docks reek of fish - it gets better as you go further into the buildings - but the whole city is covered in a permanent aura of salt. That's relatively familiar, although I am continually surprised by the lack of underlying smog. 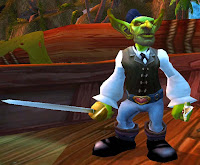 Because it's built against a long, rocky coast directly over the sea, the buildings have mostly grown up along the cliff rather than out. I stayed on the ground level at first, wandering aimlessly from shop to shop. I haggled, bartered, and negotiated with the best, and even picked up some new tricks! There are enough skilled vendors to make any goblin sigh. Weaving through them are guards - Booty Bay Bruisers, they call them. These toughs really drive home the fact that this is a pirate town. I've always considered my business a fair one, but what with all of this roughing it as a mage, I'm beginning to wonder just how pirate-y I've become.

And yet, they seem a little more open than Ratchet. I found myself in the inn for a drink and a chat, and once they recognized I was a mage from my robes, I was swamped with quests! I'll never turn down a parchment if it guarantees gold - or something of equivalent worth - but I held off leaving until I had really explored the city.

Then, it was down to business. Pirate business. I met with Baron Revilgaz (who, by the way, is the only man to make me reconsider relationship of a romantic nature), and he immediately set me to infiltrating the Bloodsail Buccaneers. I had to do all manner of menial tasks to rise enough to get close to the information and people that I needed, but fortunately I'm not so old that I can't swab a deck or dive for clams! The longer I was among the Bloodsail, the more relaxed I became about my treachery being discovered. The most terrifying moment was when they asked me to bring them the head of Fleet Master Seahorn. We had to sacrifice one of the milk cows to get a tauren lookalike head, but the Bloodsail know so little about tauren it worked like a charm. 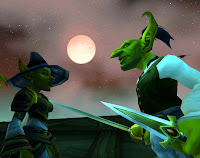 When I finally returned to Booty Bay to warn the Baron about the impending attack, I was significantly greener than when I left. Working abovedecks all day will do that! We dispatched of the attackers with few casualties, and I got to spend my evening dining with the Baron himself. I'll leave the rest to your imagination, Journal...
Posted by redcow at 6:05:00 AM