Goblins at the Faire 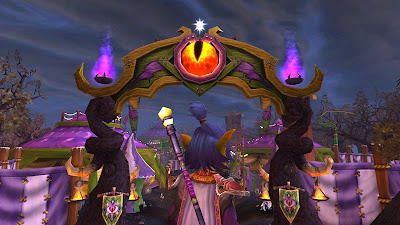 After that stint in the Badlands, I thought I'd take a break from the wide world of contract work and spend some time in Orgrimmar to manage my monetary affairs more personally. My apprentice Myda is learning the tricks of the trade quickly, and knows her way around an auction house portfolio nearly as well as I do! She'll be a great addition to the Sparklefizz family, especially compared to my good-for-nothing brother.

Not three days after airing out my apartments did news of the Darkmoon Faire spread through the Slums like wildfire. Barkers were outside at all hours advertising, and banners on every corner directed me to the city's central plateau, where a Faire mage was giving ports to Thunderbluff.

I decided to give Myda the time off, so when the Faire finally opened, I ported us both to Thunderbluff and we walked to the actual portal to the island. What little history I gathered about the Faire is that it's led by a gnome called Silas Darkmoon, and after years of traveling and scraping together gold, he was able to relocated permanently to a private island. The only problem is that it requires a special portal to get to! I wonder how he found it in the first place...

When we arrived, I must admit I was surprised by the...atmosphere. Myda's pet began to yowl and pace, and she had to spend almost ten minutes calming her down! (She insisted on bringing her lion. At least my elemental can be dismissed!) But the pet's agitation was understandable. The arrival location is in a very dark forest. Even though it was mid-morning, the forest made it seem like night! It's made even worse by the thick cloud cover - I mean, it's a lot fresher than smog, but the whole island feels damp and cold and dark. Gloomy. Maybe a little ominous. 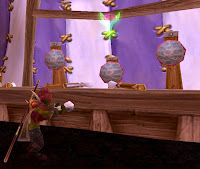 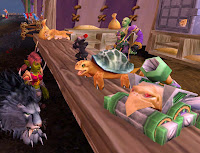 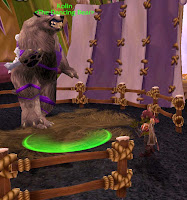 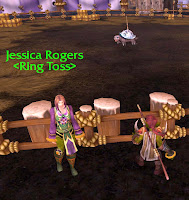 We followed the signs to the Faire proper. The flashing lights and moving parts made me think of Kezan. What I wouldn't give for an ice cold glass of Kaja Cola The Faire is massive - clearly Silas saved a lot of coin! It's much better lit than the path; there are bonfires every few steps, torches between those, and even firebreathers roaming the streets, entertaining the guests! It looks like a pretty demanding job; must be good money in that.

While Myda tried out the games, I just looked around. The contrast of bright lights and dark forest is familiar, but somehow manages to be way eerier than Kezan ever was. The carnies grin when they sell you tickets, but once the transaction's finished they go right back to serious, even grim. The trials of customer service? Maybe not. I spent some time talking with Aimee, who runs the pastry shop and got the impression that she genuinely loves her job. It seems that all Darkmoon's employees love the Faire. True employee loyalty can't be beat, but I'm curious to know how Silas earned such devotion from them, and why they frown when no one's looking.

As it turned out, Myda was pretty good at the Faire games, especially target shooting and the ring toss. She won a good pile of tickets, but it wasn't quite enough to buy anything. Maybe I'll try some games myself, see if I can't earn enough tickets to buy her a treat. After all, I need to treat my employee at least as well as Silas treats his!