a love letter to guildies

The most recent couple of times I've logged into WoW and people have been on, the guild has gotten up to some fun activities. After having peaced out for so long, I was honestly worried that I would get a chilly reception. After all, I had said I would raid in Pandaria and ended up hardly logging in after I hit 90. Generally, I tend to stress over my own assumed punishment when in reality there's nothing to worry about.

My first night back, I decided on a little low-stress leveling. Writing Weipon's story makes it all the more apparent that she needs to get her ass to Pandaria post-haste. Of course, when I say low-stress, I mean I spent several minutes cursing at the shit quest chain in that stupid mine in Blasted Lands, but still. My guildies were online, we shot the shit, and everyone was friendly and chatty and nice. I reluctantly logged off only because I was exhausted, because I wanted to stay up late and keep talking. 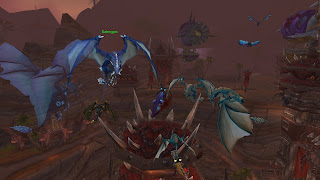 A few nights later, there were enough of us online to attempt Firelands and finish the remaining quest to get our mage his legendary. I freely admit that I was mostly in it for the pet. I had a great time, despite the fact that I think I'm more or less the lovable screwup in our band of merry men. At least the raid was low pressure, so no one got too angry when I forgot some of the mechanics and wiped the group >_> Afterwards, we zapped to Org for the completion of the quest, only to discover that despite being a quest that requires a RAID, one cannot be in a raid group to complete it. Frustrating! We did start a nice tirade in Trade chat when someone was innocent enough to ask what all the blue dragons were doing in the city (answer: announcing the next xpac).

Then, a few nights ago I decided to improve my pandaren leveling + Supernatural watching with a solo drinking game. Which, well, undertake at your own risk. One of the criteria was "the bros have a serious talk" ffs. I was drunk after one episode. Anyway, we decided to smash ICC for some reason or another, so I put my TV on hold (but not my sweet, sweet Amaretto) and was pleasantly reintroduced to what it's like being tipsy on vent. Push to lol; I hope you like my Rotface impression. In case you were wondering, if there aren't enough people on the LK fight for the valkyr to pick up, they will actually queue up and grab you one after another before throwing you to your death. I rarely get nerd rage when raiding because stuff like that happens, and that's just hilarious.

There's little point in recounting the things we said and did, because it was just the things friends say and do when they are enjoying each others' company, and that's the important part. I may have taken some time away from the game and the people in it, but being able to jump right back into that warm fuzzy atmosphere was huge for me. Thank you, guildies old and new. I love you! <3

And now we gif: