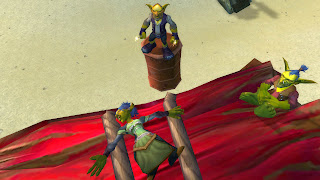 That rat! Gallywix took everything I owned and put me to work as a slave. Somehow he managed to find some goblins loyal enough to protect his stash. I couldn't even get close to his coffers and it wasn't for lack of trying!

He got his, though. We were fired upon and wrecked on the shore of the Lost Isles. Many died - I nearly did - and with our resources in shambles everyone's free, although we are still working towards common survival. Except for Gallywix, who of course has done nothing. Oh, and that slimy cheat Chip is relaxing in the sand with Candy Cane. I knew something was up! Whatever, got that freeloader out of my hair.

So far, I've helped to rescue other survivors and clear out fierce or otherwise irritating creatures on the islands. Later on I'll head down to the new mines to see what can be done.

24.09.10
The Kaja has been driving the local monkeys mad. They have become violent at the mines and killed several goblin miners. While clearing them out I photographed some mysterious and potentially lucrative cave paintings.

But none of that compares to to my other discovery. In the mine was a dead orc holding a field journal. I was able to read the entries and learned that a group of orcs also shipwrecked on the Isles and are camped nearby. I'm going out there to find any bargains to be had.

I found the orcs. Been pretty much singlehandedly saving them from everything. They couldn't even deal with an endless forest of constricting, freezing, carnivorous plants! Sheesh, how did they survive anything? The payment isn't all that good, but they are fixing up my gear at least. And maybe a little face time will open up some more opportunities.

The Alliance is crawling all over the island. I think the orcs have lost something important and are trying to find it without telling me what it is. I feel like there's money to be made here - in reward or ransom - but I just can't get myself to think right! 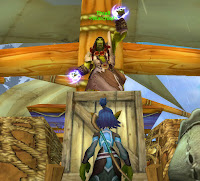 You're not gonna believe this, Journal. That thing the orcs were missing? Yeah. The Warchief of the Horde. I stumbled across him in the hold of an ally ship. Briefly I considered ransoming him off to the orcs, but I had no way to transport the cage off the ship. That, and as soon as he escaped his cage he transformed me into a tempest and asked me to zap some humans. I don't think the payout is nearly the same.

I'm waiting in line now for a rocket off this island. Someone found a Town-In-A-Box, so we're gonna set that up across the way. Gallywix is here, unfortunately. I hope his rocket crashes and burns. 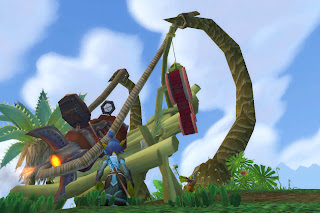