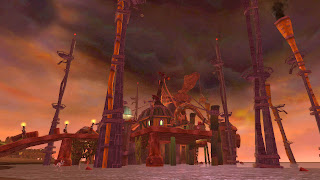 I found the rest of my associates. A few had managed to break free, but most were still completely out of it, slaving away mining kaja'mite in the volcano. You know, the one that was erupting. Exactly how, I ask you, is it profitable to lose your entire workforce and stock to a natural disaster that you can avoid? As it turns out, all my associates needed was a quick shot of Kaja Zero to get their minds back in working order. I had a bit as well and feel fantastic! We busted out of the volcano in no time after we got our thinkin' on. 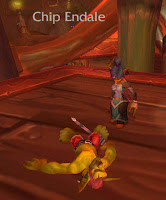 At the base of the volcano we discovered where Gallywix had gotten off to. In addition to sabotaging his plans, Izzy talked me into killing Chip. To be honest, I had all but forgotten about him. I mean, I haven't even seen him since the beach! And even before that, we barely interacted except for that fashion advice he gave me for the party... I guess we had really grown apart. But as Izzy pointed out, Chip also started working for Gallywix. We had a contract, and it didn't end just because Kezan blew up! 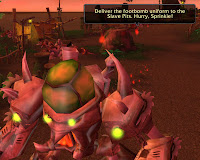 From there it was time to deal with Gallywix's slave pits. I rescued as many captured goblins as I could find, and took out even more Steamwheedle thugs. Also, Sassy wanted me to kill Candy Cane. I don't know her all that well, Journal. Sassy kept telling me that Candy stole my man away, which I guess is true, but I couldn't understand how killing her would be profitable for me... Then Sassy reminded me that Candy now works for Gallywix, and as my formal rival and current nemesis, it's practically my job to take out all of his associates!

While I was dealing with the slave pits, they got a footbomb uniform rigged up to take on Gallywix. Hehe. I'm really, really good at footbomb. Marching up to Gallywix and kicking his weenie little rig's can made my day! I felt like a million macaroons. The only thing that really stung was Thrall believing that sniveling weasel and reinstating him as Trade Prince! Hellooooo? What about me? I've pretty much shown that I can make a buck while still saving the collective lives of my associates! What more could you possibly want in a Trade Prince? 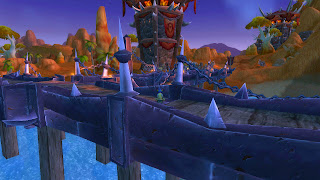 So, this is it, Journal. I'm back to being just another goblin. Thrall has given me some paperwork to deliver to some Garrosh character in Orgrimmar. We are just about to set sail and find out how we can fit into the Horde. It's time for me to get my empire back in order!
Posted by redcow at 2:33:00 AM