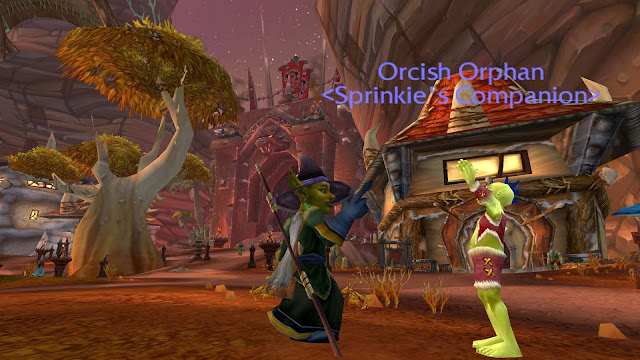 Children's Week...it was something I never really put much work into on Kezan. Sure, we had it marked on the calendar, and the orphanage ran events to generate a little coin, but I usually just sent my yearly donation and went on with my life. It's not like we had many Kezan goblins fighting and dying and leaving behind children anyway. Most engineering failures only take one half of parents anyway. I would know! This year, I found out that on the mainland, they really go all out! I followed the flyers to the Orgrimmar orphanage and in short order the Matron had hustled me inside and set me up with a young orc lad named Logal. Kind of makes you wonder what kind of people show up to help - they didn't ask me many questions about myself or my intentions!

Logal was a sweet boy, loud, fun-loving, adventurous, and prone to scratching himself and picking his nose. Rather like me when I was a girl! I liked him immediately. He explained what little he knew of his history: he was born in an internment camp, though liberated before he could really remember it, and his parents killed, mother and then father, fighting in skirmishes for Thrall's Horde.

The first thing he wanted to do was visit the Rocketway in Azshara. Having spent a fair amount of time using it lately, I was happy to oblige. It's always good to support young minds interested in engineering! I buckled him into the tiny passenger seat on my turbotrike and set off for the secret lab. I was a little worried about night elf bandits, or even just irritable wildlife, so I stuck close to the road and kept an eye out while Logal whooped and shouted at everything we passed. Talk about an aggro magnet! I couldn't imagine intentionally taking a child into active combat...

We made it safely to the end of the Rocketway and walked around for a while checking out the other vehicles on-site. Logal was curious about everything. Only about 80% of the contraptions were even lethal, so the engineers let him run around. When we boarded the rocket, he took the main controls and wasted no time at all experimentally hitting buttons. We shot off along the track, and Logal activated each of the special boosters one by one. At some point we completely disengaged from the track and spun out, but Logal got things under control again in no time. We made it to the nearest access tower out of breath and disheveled. Logal looked pretty pleased with himself. I was so proud of him!

At first I thought I should get him back to the orphanage for the night, but he assured me that the goal was for the kid to spend all his time with an adventurer. I guess if they don't care who's taking kids around, they don't care how they spend their time. We slept at the base of the access tower, Logal bundled in my extra blankets.

The next day was...Cairne Bloodhoof's funeral, if you can believe it. I hadn't been planning to go, but apparently Logal really looked up to the Chieftain and wanted to see him off properly. We returned to Orgrimmar and boarded a zeppelin to Thunderbluff. IT was crowded - it seems that everyone wanted to honor the old tauren. Logal met some other orphans on the ride to swap stories.

In Thunderbluff we hitched a ride on a caravan heading to the burial site. Well, not burial. I don't know much about tauren funerals, but they had Cairne's body wrapped and placed on a bier, surrounded by important possessions, which they burned! Can you imagine how valuable those things must have been?! The mind boggles!

When the rites began, Logal swears he saw old tauren ghosts appear and talk to Cairne, but all I noticed was the wind. At least I think Logal enjoyed it, as much as you can enjoy a funeral. There were people everywhere, including druids, so he stopped trying to pet the "hunter animals" pretty quick.

The funeral went on for a long time, as people celebrated Cairne's memory, so we got a hammock in the inn at Thunderbluff. Singular hammock; it was very crowded. Hammocks aren't really made to sleep two, so I ended up underneath. Only got stepped on once when Logal got up to use the bathroom...

After that was even more travel. We caught an early zeppelin to Orgrimmar, then switched immediately to another headed for the Undercity. Logal wanted to meet Sylvanas, the Banshee Queen. It was both of our first times to visit the Eastern Kingdoms. I was incredibly surprised to see the gloom and fog of Tirisfal Glades. I didn't know what blighted land would look like, but it can be summarized as unnaturally green, smoky, and artfully decayed. The same goes for the Forsaken, and their sewer city! Green and stinky.

We explored the Undercity (and by explored I mean got hopelessly lost). I can't read or understand Gutterspeak, so we were really on the kindness of anyone who could speak Orcish. Finally, a guard agreed to show us the way to the throne room. Although, come to think of it, there wasn't a throne. Maybe undead don't get tired of standing. Sylvanas was nice enough to Logal. He told me later that he had wanted to ask why her body still looked so nice compared to other Forsaken. Probably good that he didn't.

I decided to take the overnight zeppelin back to Orgrimmar. Neither of us were really keen on spending a night in a city inhabited by zombies, Horde or not.

Logal seemed fine after his trip to the Undercity, but I stopped by the new ice cream shop in the goblin slums and got us both a big Cone of Cold. Logal sure enjoyed it, and it made me feel a little more relaxed (not that I would ever admit to being scared of a few Forsaken!). As it turns out, Logal is not good with milk products, so after that rather tense hour I got us some Dragon Kites to play with. Good thing it never rains in Durotar or I might have had to contend with lightning, too!

I definitely developed a soft spot for Logal. He listened eagerly to my adventures on Kezan and the Isles and told me about his life in Orgrimmar. His friends, his fears, his dreams, his favorite toys and games... I forgot what it was like to be a child. He may not have parents to give him the attention that he deserves, but I hope he still manages to hold onto what he wants out of life and get it someday. I would hate to see someone as bright as Logal become a peon.

It was soon time to get Logal back to the orphanage. On the way, I bought another toy, this time a big foam sword rack that all the kids could play with. We set it up outside and let the kids run wild in the street, smacking each other with the brightly-colored weapons. Ah, youth. I was sobered to see goblin children running around amid the orcs. It's not like I didn't intimately understand how they had come to be in Orgrimmar, but still a shock.
Logal disappeared inside, only to return with a colorful snail in tow, which he then shyly offered to me. I felt kind of miserly, accepting a gift from a child too poor to even buy himself new clothes, but the Matron quietly reminded me that the orphanage could not afford to care for both children and their pets.

I did feel a bit sad to leave Logal in the orphanage again. At least he wasn't alone, and I'm sure they get taken care of just fine. Still, I'll put them on my yearly donations list. Maybe I can visit him again sometime!
Posted by redcow at 1:00:00 AM