"It's only for a few days," the pandaren soothed, patting her mother's arm

The middle-aged pandaren huffed noncommittally. "I don't see why you can't just keep training here in the village."

Now the younger pandaren's features drew into a frown. "You're the one who wanted your daughter to learn traditional cultural arts. I can't help it if I'm particularly good with a staff."

"You're particularly good with a brush, too, though," said her father sadly, not looking up from where he was carefully affixing a tuft of horse hair to a bamboo reed.

The pandaren closed her eyes briefly. "Well, that was inevitable growing up in a house of brush makers. Anyway, I only need to defeat two more opponents to get my final rank certification. I'll be back before you know it, and I'll get right to work. How does that sound?"

"It's fair," her mother replied. "I did agree to let you go." She took her daughter's elbows and kissed her cheek. "Be safe, Weipon."

Weipon smiled and turned to go. Her dog Fu ran around frantically underfoot until her mother scooped him up, holding him under one arm and waving with the other. As she left, her father called out, "Give 'em hell!" 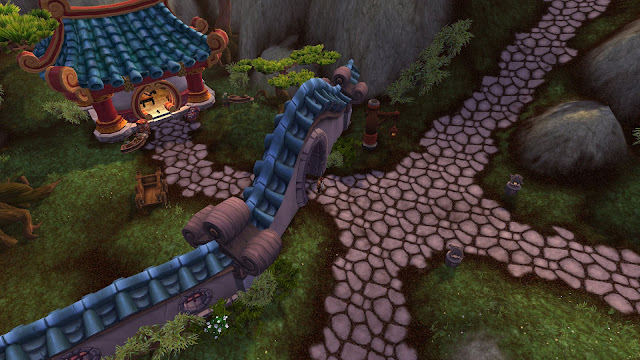 She had to walk from Mandori Village to the training academy where Master Shang Xi had summoned his students. The sun was setting as she left the village and started down the rural road that cut through the surrounding fields to the small hill. Soon, the moon had risen, and she began to look for the natural overhang where she had rested on previous trips. Thinking of her parents, she composed a poem.

Moon rising over the road,
Reflected in the white sheet.
The ink is ground, the weight set,
Breathe and put brush to paper.

She awoke with the sun and resumed her walk, finally entering the training ground as the sun approached six fingers above the horizon. Other students, some of them looking as if they trained there regularly, were already beginning chores or milling about expectantly.

Weipon headed for the hill on the edge of the academy, knowing she would find the good-humored Master Shang Xi there. He was sitting cross legged on a rock, watching the students below with sharp eyes. He smiled when Weipon approached.

"I'm glad you could make it. I suspected your father might not like to miss you for so long. You know, he and I used to be drinking buddies."

She bowed, half-smiling and half-grimacing at her feet. "He's told me many times. I couldn't pass up this opportunity to learn from you again, though."

His expression turned sober. "I have many things to teach you before it is time for us to part. But first, I know you are eager to complete your final matches. Go and see when you have been scheduled to compete!"

Weipon competed in the first round of the day, dispatching her equally ranked opponent with some effort. As she bowed to him and the judge, she noticed Master Shang Xi in the crowd, peering at her contemplatively. When she looked again, he was across the room, silently watching two initiates sparring.

She didn't see him again while she watched other matches and waited for her second in the afternoon. This opponent, a surly, barrel-chested woman, put up quite a fight, but in the end Weipon was able to accrue more points and win with a judge decision.

The final ceremony went by in a blur, as each competitor who had progressed was awarded their higher rank. Weipon stood alone, admiring her new sash, and was surprised by a hand on her shoulder.

"May I speak to you for a moment?" asked Master Shang.

"Of course!" she replied, immediately moving to follow him.

He walked slowly to the staircase in the training house, but stopped at the foot. Without turning to her, he murmured, "Burn the Edict of Temperance and return to me." He strolled away, offering congratulations to other students.

Weipon blinked, then jogged up the stairs. She knew that finally having reached the highest rank, her training was only beginning. Traditional pursuits were lifelong studies of the art, after all. She just hadn't expected her first lesson to involve burning one of the oldest, most important doctrines in the school.

The words on the paper whispered across her mind even as she set fire to the Edict. Even if the physical paper no longer existed, she wouldn't soon forget the earliest lesson. She returned to Master Shang.

"Have you given any thought to whether you will follow the Huojin or the Tushui?" he asked abruptly. She opened her mouth, but he interrupted her. "There's no need to decide anything yet. I expect you will have plenty of opportunities to weigh both options." He left the training house and shuffled down the hill, leaning on his staff. Weipon followed obediently. "The pandaren have not spoken to Shen-zin Su in many years, and it is high time we fixed that," he said gravely. "To do so, however, we will need for each of the four elements to return to the Temple of Five Dawns." He paused to let the weight of that sink in, then continued, "Two of my former students, Aysa Cloudsinger and Ji Firepaw, are already taking measures to awaken the elements. I want you to help them."

Weipon stopped, shook herself, and rushed to catch up with her teacher. He stopped at the main gate, looking out over the grassy hills rolling away towards the mountains. Weipon joined him, standing beside and slightly behind the elderly pandaren.

"Ji has gone to Wu-Song Village to seek a method to awaken Huo. Collect your belongings and go to assist him. Learn from him." Master Shang Xi turned to his student and smiled. "I look forward to seeing you soon." 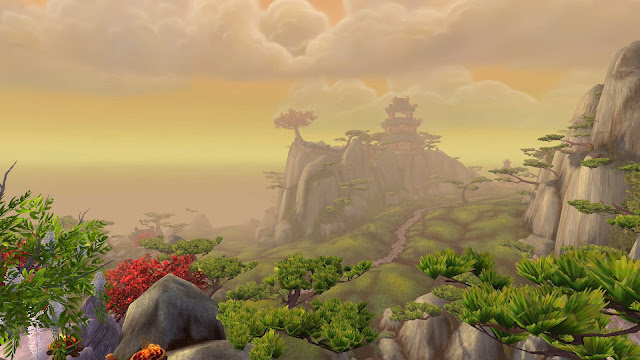