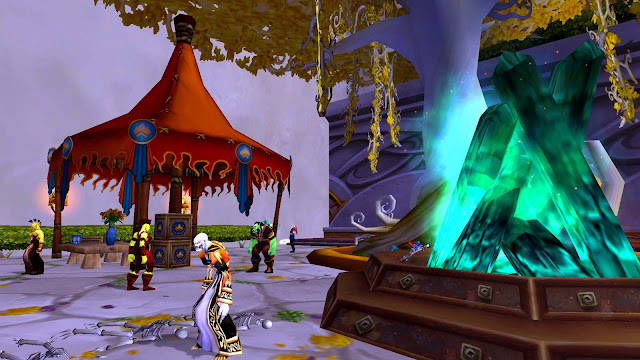 The Midsummer Fire Festival, according to the official Blizzard explanation, “celebrates the hottest season of the year.” It begins on June 21, the northern hemisphere’s summer solstice, lasts for two weeks, and finishes with an event known as the Fireworks Spectacular (formerly the Engineers' Explosive Extravaganza) that coincides with the USian Independence Day on July 4. The holiday features a host of daily quests, yearly quests requiring lots of travel around the continents, buffs obtained from food and other means, festive clothing, and fun vanity items like the Brazier of Dancing Flames and the Captured Flame minipet.

The event is based on the Earth celebration of Midsummer, with influences from Northern European nations, particularly Finland. In Azeroth, revelers light bonfires both because the season is hot and because they are hosting fire emissaries from the Elemental Plane. On Earth, the bonfires are lit on Midsummer to protect against evil spirits roaming in the night. Only some foods are directly mentioned in Midsummer events, so the in-game snacks are derived from food typically eaten at barbeques and campsites. Midsummer Sausage and Toasted Smorcs are reminiscent of typical campfire fare: hot dogs and smores. Elderberry Pie makes me think immediately of Monty Python, although there are plenty of recipes for said pie on the internet. Fire-Toasted Bun is a humorous name that most likely refers to player characters spending most of the holiday standing very close to bonfires. 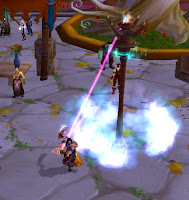 Other earthly celebrations have been adapted for Azerothian use, most notably the maypole. As suggested by its name, the maypole is typically erected on May Day, however in Sweden it is put up during midsummer. The maypole is used in game to generate a buff; when a player clicks on the Ribbon Pole, their character is connected by a fiery ribbon to the pole and spins around as if dancing. This animation will continue until players move out of range, and in fact if they run around the pole it is reminiscent of maypole circle and ribbon dances.

Midsummer plants are believed to have magical healing powers and are picked on Midsummer Eve. Although the healing properties were not retained, the Burning Blossoms that players collect and use as currency look similar to Calendula, and when thrown into a bonfire provide a damage buff in addition to relighting doused flames. These plants are also referenced in the Handful of Summer Petals, a vendor item that shows the player being sprinkled with summery petals. Midsummer revelers may wear crowns of wildflowers, but although players can garb themselves in the Vestment of Summer, Mantle of the Fire Festival, and matching Sandals of Summer, the Crown of the Fire Festival does not resemble a circlet of flowers. This year there is also an extra hat: the Helm of the Fire Festival allows other players to cook on your character's fondue hat!

The European Midsummer is celebrated with singing, dancing, effigies of spirits, rituals promoting fertility and marriage, and daring leaps over the bonfires. Azeroth has ignored any reference to romance or virility, and instead of something as tame as jumping over a flame, encourages players to not only honor their faction’s bonfires, but to steal those of the opposing faction! There’s nothing quite so daring as running through the streets of Stormwind to steal the flame of the Alliance’s capital city. Two daily quests also ask players to play with fire. For Torch Tossing, a player must light a torch in the main bonfire, then throw it into a marked brazier. For Torch Catching, a player must light the torch in the bonfire, then throw it overhead and attempt to catch it as it falls and throw it again.


Rather than burn effigies to protect themselves from spirits, the citizens of Azeroth invite said spirits, in the form of fire elementals in service to Ragnaros, to spend Midsummer with them on the mortal plane. Players are directed to speak to a Festival Talespinner, who will explain why the elementals are present and ask the player to honor them with a gift of incense. Of course, this empowers the diminutive scorchling, who expands rapidly, taking on the shape of Ragnaros, and reveals that perhaps the emissaries are not so willing to negotiate peacefully as they suggested.

Now! Finally! Our plans can take effect!
KNEEL, LITTLE MORTAL! KNEEL BEFORE THE MIGHT OF THE HERALD OF RAGNAROS!
YOU WILL ALL PERISH IN FLAMES!

Although there are no spirits to fear (or so we foolishly think) on Midsummer night, the Captured Flame pet likely comes from the will o’ the wisps supposedly seen at night in Finland. Players used to be able to get a scorchling minipet from the holiday dungeon, but it has been changed to a frostling pet instead. 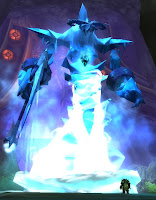 The major questline for this holiday is built around some very strange assumptions about the elemental lords Ragnaros and Neptulon. With Cataclysm, I expected this to change drastically – after all, we now know beyond a doubt that Ragnaros is not going to do anything beneficial with his emissaries of flame hanging around our bonfires. Furthermore, we have spent an entire zone helping Neptulon deal with both naga and their old god allies. And yet, the premise of this holiday’s story and quest chain is that Skar’this, a naga held captive in the Slave Pens and loyal to Neptulon, is plotting to summon the Frost Lord Ahune to confront the Firelord. Despite the fact that characters should be eager to support such a venture, low level players are directed to summon and defeat lesser ice elementals from Ice Stones around the world, and max-level characters travel to the Slave Pens to melt the main Ice Stone, disrupt Ahune’s connection to the elemental plane, and defeat him. Rades has a wonderful examination of Neptulon’s perceived motives and power with a subsection just for Ahune here which is definitely worth a read, and brings up further questions about what players are doing in Vashj’ir and during the Fire Festival. 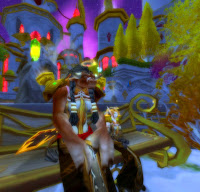 With appropriate transportation, a character can honor or desecrate the holiday fires and can complete the quest Stealing [City]'s Flame upon looting the flames from their opposing faction’s four major cities. After doing the lead-in quests, players can do 3 daily quests. A guide to the meta-achievement awarding the title Flame Keeper (H) or Flame Warden (W) can be found here. The Ahune boss strategy can be found here.
Posted by redcow at 6:45:00 AM