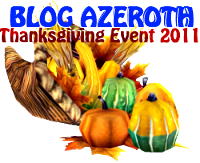 Amerence of Amerence Love WoW has come up with a wonderful event for this year's Pilgrim's Bounty. She's encouraging bloggers to give thanks, be it with a picture, story, or short note, to their fellow bloggers during the week of November 19th. Giving has its own rewards, as well, because a team of judges will pick the top three posts and distribute some wonderful prizes! Get all the important details here at her site; there's still time to participate!

I sort of dread calling people out by name, because inevitably someone will be left out and I'll feel terrible, so just assume that if you are on the list at the right or have ever commented on my blog, YOU ARE APPRECIATED AND LOVED. That having been said!

Thank you to Windsoar and Ophelie and Amerence for working so hard on Blog Azeroth and its community. Thank you to Beru and Fimlys and Hydra for your work on Twisted Nether, promoting and supporting the blogosphere. Thank you to Kamalia and Jamin and Draccus and Navi, whose comments I tuck away close to my heart. Thank you to the folks at Flavor Text Lore, to Rades, and to Saz for bringing me good stories. Thank you to my DURID FRIENDS Khizzara, Jasyla, Icedragon, FeralTree, Glowberry, Solitudeone, Elfi, Jar, Lisanna, Angelya, Syrco, Lara, Arielle, Reesi, Tzufit, Keeva, Keredria, and Juvenate, for massaging your grey matter so I don't have to. Thank you to Edenvale, even if you always make me hungry at work! Thank you to the lads and lasses of All Things Azeroth, The Instance, and Girls Gone WoW, for making me laugh and keeping me up to date on news. Telさんにもありがとうございます！日本語でおもしろいWOWのブログを読んで、勉強になっています！


The tables were dressed, chairs tucked in and candles waiting to be lit. Upwind of the tables were the cookfires, which Akabeko now went to inspect. She passed Maurene, who was arranging the autumnal centerpiece on the children's table, and motioned for her to follow.

They met Iharu, who was standing nonchalantly by the spits, watching the plucked plainstriders rotate. The birds dripped juice into the fire, which sizzled and emitted a mouthwatering scent.

“I am really hungry,” Iharu muttered, half to herself, staring blindly at the line of golden birds over their fires.

Maurene wrinkled her nose. “I don't know what you see in cooked fowl, but those,” she nodded towards where the guild rogues were eagerly mashing up sweet potatoes, “look appetizing. Dug out of the ground, mashed up; that's the right idea.”

Iharu came out of her reverie. “You know they get cooked up with sugar and honey, don't you?”

“They what?!” Maurene looked affronted. “Why would anyone ruin perfectly good food with seasoning?” She spluttered, frowned, and looked longingly at the potatoes.

“Calm down, Maurene,” Akabeko said absently. “You know that I had them prepare a special mushroom dish just for you.” She looked around furtively. “Iharu, how are we doing on the...project?”

Iharu sidled casually over to a preparation table, where the cooked plainstriders were being dressed for the meal. She indicated two nearly-finished birds on the end of the table with a meaningful glance. “These look really delicious,” she said unnecessarily, to throw off suspicion. The guildmates moving around the table looked at her in confusion.

“You could...help,” suggested another paladin snidely.

“Oh, how silly of me. Of course,” she acquiesced, and began to attend to the plainstriders she had shown to Akabeko. No one noticed her uncharacteristic helpfulness.

Akabeko stepped away. “I am going to set out name cards,” she said, too loudly. A few guildmates looked up in acknowledgement before going back to their own tasks. She moved among the tables, setting out the heavy cards, decorated with leaves by the druids, then labeled in a guildmate's artistic hand. There was relatively little wind in the shadow of the mesas of Thunder Bluff, so the cards would be fine until the meal. Akabeko checked the sun; it was midday, and the feast would not begin for another hour or so. There was plenty of time.

Maurene stalked to where the sweet potatoes were being prepared, trying and failing to surreptitiously carry a picnic basket. She seized a bowl of the finished product, covered with a ceramic lid, and placed it ungraciously in the basket. One of the children helping noticed his, and she stuck her tongue out at him until he turned away in fright. She moved to the next table, repeating the theft with string beans, then again with a loaf of corn bread. At the cranberry table, she was too slow, and the chef in charge saw her abscond with a plate of jiggling cranberry jelly.

Akabeko heard the cry from where she was artfully arranging a seating chart of her favorite druids, conveniently placed by the table of her closest correspondents. “Just what do you think you're doin'?”

“I need this for my centerpiece!” Maurene replied arrogantly, drawing herself out of her slouch and to her full height. This did not have a menacing effect, as the chef was himself a troll and significantly taller at his full height.

“What do you be needin' jelly for? That's for eatin', not displayin'!”

Maurene scoffed. “Of course it's for eating; it's an edible centerpiece! I wouldn't expect someone so obviously lacking in creativity to understand, though.” She gave him a disdainful look, then walked away before he could think of a comeback.

During this exchange, Akabeko had located her other cohorts and signaled them to assemble in their previously-determined locations. She moved back to the cookfires, where Iharu had finished dressing the birds and was standing protectively over them, pretending to make finishing touches. Maurene appeared with her picnic basket, and nodded to an undead mage who had also arrived. They clustered together, awkwardly trying to appear as if they were not waiting for something.

Suddenly, a voice rang across the clearing, amplified by magic. “Hey! Do you guys want to see a great magic trick?” On the opposite side of the tables, directing attention away from the spits, were a priest and a warrior.

“It's a really neat trick!” the priest continued. He walked away from the warrior, who grinned at the audience.

“Ready for transport!” Katza hissed, stepping away from the portal. Akabeko and Iharu stepped forward and grabbed the two plainstriders.

“Hug!” cried the priest, using his powers to fly the warrior across the gap and into his arms.

“Aww, no, you said you weren't going to actually hug me...” the warrior was protesting, squirming against the priest's taller frame as the four women hurried into the portal.

They stepped out of the portal into a serene forest, the sound of halfhearted applause fading behind them. Directly ahead they could see tables, similarly decorated to their own feast, and beyond that humans and night elves moving among their own cookfires.

“You weren't kidding about close,” Akabeko muttered, watching a gnome with enormous pink pigtails set down jugs of ale on the feast tables. She was crouched, awkwardly contorted to hold the plainstrider. “Any closer and we would probably be pincushions now.”

“It's less distance for you to run with that ridiculous bird,” Katza shot back. “You could have taken a zeppelin and gotten here next week!”

Maurene snorted. “Are we going to do this or what? They will probably be sitting down to eat soon as well.”

Katza rolled her shoulders. “All right, the invisibility should last long enough for us to get to the tables and back. No dawdling, and be prepared to run like hell!” She shook her hands as if drying them to cast the spell, then took off towards the feast tables. The group followed close behind.

Akabeko and Iharu set down their platters, then turned to help Maurene unload the picnic basket.

“Light, Maurene, how did you carry all this?” Iharu exclaimed quietly as they removed dish after dish.

Maurene shrugged. “Magic joints. I don't really notice physical things like weight until an arm comes off.” Katza grinned at her.

“The food is kind of cold now,” Iharu muttered, poking experimentally at a dish.

“Do we have any way to heat it up?” Akabeko mused.

Maurene opened her hands, smoke coiling out of her palms. “Fel fire!”

All three immediately pinned her hands to her sides, chorusing, “No fel fire!”

Katza opened her hands, tendrils of fire extending from her palms to the food. “How about just regular fire?”

“And the finishing touch...” Akabeko removed a handwritten card from her pocket and set it atop the nearest plainstrider. “Hopefully they understand my Common.”

A shout went up, and the four looked up sharply to see a draenei woman with dark, curly hair looking curiously at them. Behind her was a line of night elves. Akabeko had time to notice a stocky dwarf hefting his mace hesitantly before they were off, running frantically to escape the Alliance.

Maurene was glowing, green flames running up her arms and around her head. “Fel fire!” she cheered hoarsely, turning in anticipation of attacks from their rear. Iharu grabbed her roughly by the arm and sprinted ahead.

Katza had blinked ahead as soon as they were discovered, and Akabeko shifted in order to catch up to her. “I think I saw one of those night elf blokes waving,” Katza said conversationally, risking a glance over her shoulder.

Akabeko shifted back in order to respond. “I have plenty of connections with Alliance druids, which is why I wanted to share the meal in the first place,” she panted. “That doesn't mean they won't shoot first, ask questions later.”

“I don't think they're following!” Iharu called from behind them. Katza stopped and immediately began to cast a portal. They tumbled through, crashing into each other in their haste, and ended up in a graceless heap right where they had left Mulgore.

The priest and the warrior were waiting. The warrior bounced on his toes and began speaking before they had sorted themselves out. “You wouldn't believe what happened while you were gone!” He pointed to the feast tables, where guests were gathering and harried hosts were bringing platters too and fro. “A bunch of gnomes showed up and left behind a feast, then ran away!”

The priest shook his head. “I just don't understand why they were shouting 'Lilli, lilli'!”

As an added bonus, because I am weird, I made some gifs of myself baking that Harvest Bread from the Gamer's Fridge. My camera battery ran out before I got to the fruit and the actual baking, so you miss out on me wildly chopping cranberries while they fly all over the place, and also the first exceedingly crispy loaf that came out. Next time!