Back when I was a wee druid, my friend (who played a resto druid) told me "For the love of God, whatever you do, don`t level as resto." He had, for some inexplicable reason, leveled as resto in Vanilla. I feel like this is an important point - in Vanilla - because it highlights why he felt so strongly about it. It was an older, simpler, less-forgiving time, and I could see where he might have developed a distinct phobia of leveling as non-dps. So, I followed his advice and leveled to 70 as feral.

Then Wrath came out, and I no longer had any feral gear to wear, and besides, this was well before dualspec and I didn`t want to pay just to respec and then get gear and then have to respec for dungeons and, and, and. So I shipped off to Northrend with just my healing leather on my back and leveled to 80 as resto. It wasn`t...bad. I mean, it`s not like I died a whole lot, mostly because mobs didn`t pose much of a threat, and because I could heal myself anyway. It was just slow. Incredibly slow. So slow that when I finally got dualspec and went moonkin, I couldn`t believe how fast things died. I got immense pleasure from running through cultists with Starfall, then hurricaning them down for tournament dailies. Even now I`m amazed by how fast it is to kill things with (moon)fire.

At the moment, I have very respectable LK gear for resto, and a feral bear-ish set of similar quality pieces. Neither spec is dps, but bearcats tend to do more damage than trees. Excuse me, restoration tauren. But then I thought, what the hell, I`ll see how the addition of Insect Swarm affects my sick dps. As I told manfriend, it`s as I remembered: possible, but ultimately disappointing. Entangling Roots is basically a joke - I can get both dots up and halfway through Wrath before they break free. With my two dots and Thorns every cooldown I still find myself ineffectually spamming Wrath while my dots wear off. At least questing with manfriend`s ret pally was enjoyable. I felt like I wasn`t pulling my weight, though, so I made up for it by pulling lots and alternating between dotting mobs and healing him. The respawn rate is a little out of control right now, so at least working together has saved us from some hairy situations.

At level 81 this is the spec I am running with: 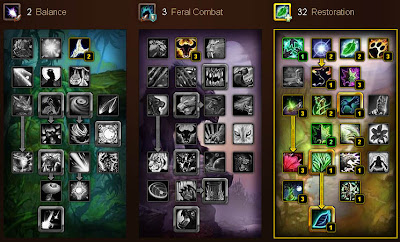 Talents here.
Talents I'm still interested in: Blessing of the Grove, Nature's Bounty, Malfurion's Gift, Nature's Grace. I haven't gotten to do a ton of dungeon-ing yet, so I'm not sure how my spell usage and resulting numbers will look. Malfurion's Gift seems like a generally good choice, especially doing 5mans now, since I am tank healing and therefore using Lifebloom a ton. Out of Rejuve and Regrowth, based on what seems to be both oft-used and useful will determine if I go after the Rejuve talent or the Regrowth talent(s). Keeva recently mentioned that she removed Efflorescence in favor of Moonglow based on how useful it was in her experience, so I'll be looking out for that as well.
So far I've been fairly cautious with my mana usage, having been warned that it's brutal and people are drinking all the time. Maybe it's because I'm just doing regular dungeons or running with a very skilled tank, but I haven't been having so many hairy moments as others have suggested. At this point I think I'll try to be a little more bold with my spells, mostly by allowing myself to use Rejuve and Regrowth more often in addition to Nourish/HT around the group and Lifebloom on the tank. Swiftmend and Efflorescence have so far helped out a little bit with the melee group, and I'm going to allow myself to use Wild Growth more often to see where that gets me. In trying to wean myself off of compulsively topping everyone off I'm afraid I have scared myself out of "wasting" spells. Be bold, Beko!

Oh, and if you were wondering, I went with feral for questing in Vash'jir and it is much more satisfying (not to mention efficient!). I just wish that I could navigate the extra axis more easily!
Posted by redcow at 7:02:00 PM